The Lord planted a seed for a mission trip in our heads at the beginning of this year. In fact we made new years resolutions and one of our friends said, “y’all will go on a mission trip.” We started researching and we are so thankful that Davis Orders went to Tanzania because it was through a friend telling us about his trip that we found Young Life Expeditions Africa.

We applied in January and the Lord answered quickly and the journey began. “Whom shall I send? And who will go for us?” And I said, “Here I Am. Send me!” – Isaiah 6:3

To Kenya we were going, and the Lord began preparing our hearts from day 1. Between fundraising and attacks in Kenya…Satan was after us, but we persevered and come June 19th we were on our way to change the world in Kenya…or so we thought.

As we reflect on our time in Kenya and process what we experienced there were a few takeaways we wanted to share.

God is bigger than….

We discovered in a whole new way that you fill in the blank with anything and God is bigger than it…because He is bigger than everything. He is bigger than my city, my church, my problems. Bigger than any circumstance anyone in this world finds themselves in. He is bigger than fear. He is doing big things in Greenville and we get to be a part of that, and man…how prideful we were to not think He was doing big things in Kenya as well. God blew us away with His glory and love there. Young Life is expanding all over the continent of Africa and God is using this organization to do big things. In Kenya alone there are 391 leaders, 74 neighborhood groups and 125 clubs in schools. The work they are doing is incredible and the only way they are able to do it is solely through the resources that people donate through mostly America. They are reaching parts of Africa that seem to be unreachable. 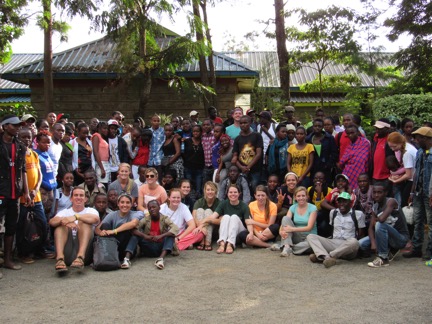 Dependence on the Lord is so apparent in everything they do. Many of the friends we were able to meet and spend time with showed us what faith looks like. They are walking in life with the Lord having sacrificed something…whether it be a job, friends, family, traditions, culture, or even food. One of the Kenyan Young Life leaders, Martin, spoke at the first club about the sufferings and pains we cling to in life that can keep us from knowing the freedom we have in Christ. He challenged each kid to write down the pain and suffering they needed freedom from and then had them ask God to take it. They prayed about it and then came back together and lifted their papers up high while kneeling and praying. They then set a fire in a pot and each put their paper in the fire and said, “I surrender my pain and worries to Jesus.” You could feel their pain, their suffering, but also the Lord in that place. There were Muslims and children of Kenya at camp giving their lives boldly to Jesus Christ. It was powerful. It was beautiful and there just aren’t words that can describe it. Their daily prayers are outside of themselves, and their gratefulness for the mercy and grace the Lord has bestowed on them is beyond what I call thankful.

This gratefulness was extended to us when the entire camp of leaders and 200 kids surrounded us, laid their hands on us, and prayed for us. I have never felt more undeserving of their love than in that moment – what a humbling experience as 200+ voices prayed together thanking the Lord for us. I’ve never known a whisper to be so powerful. These people love us with true agape love unlike anything I have ever seen. We found it to be so unique that they invite the Holy Spirit into the presence of their prayers and where we are every time they pray. It was such a peaceful and comforting way to pray…as we know the Holy Spirit is with us, but what a humbling thing to invite Him in wherever we are…who doesn’t want to be invited in?

America needs what Africa has. Society tells us that we are among the wealthy and they are not. Yet, we discovered they were not lacking in anything. Their wealth comes from within. When your wealth comes from within, you find that what pours out is joy and love despite any current circumstances. Their ability to “just be” was unsettling at first in contrast to the scheduled lives we normally live, but as the days went on we began to revel in every moment we got to “just be”…TIA (This Is Africa). The people of Africa focus so much on building relationships with the people around them. It is such a wonderful way to live out the gospel. God created us as relational beings and that’s what Jesus did during his time here on Earth. Jesus continues to pursue relationships all over the world with each and every one of us.

“Our desire is not that others might be relieved while you are hard pressed, but that there might be equality. At the present time your plenty will supply what they need, so that in turn their plenty will supply what you need. The goal is equality, as it is written: “The one who gathered much did not have too much, and the one who gathered little did not have too little.” – 2 Corinthians 8:13-15

Being the Same Yet so Different at the Same Time

One of the YL Leaders, James, warned us that many of the kids felt unequal to Americans or “mzungus” as they called us. They had not spent much time with mzungus so they had no idea how similar we all really are. They simply believe that America is a wealthy, well off nation and that we are better than them. We could feel and see this during an experience we had with a small group bible study. One of the boys was afraid to speak out or respond to the questions for fear that he would not sound smart. Martin, their leader, reassured and encouraged them that they were free to speak among us. As we shared more they began to open up with each other and us. The bible study was about HEALTHY friendships and the “T” in the word healthy stood for Trust. A boy named Johnte and I were partners and we began talking about what parts of a healthy friendship we struggled with. We discovered that we struggled with the same issues…trusting close friends and being completely honest with them. We were able to encourage each other and we came up with ways that we could practice this with the great friends the Lord had blessed us with. We talked about how with great risk comes great reward. We both agreed it was worth it to be honest and trust our close friends with our story…every part of our story!

The night before camp started we were spending time with some of the Kenyan leaders and we began talking to Peter. Maggie is really good at asking questions, so they began to come out as we were eating dinner and Peter answered them all. As we began learning more and more about his life, we could feel his pain from the past, the sacrifice he made for the Lord, and his joy and passion for what he is doing with Young Life. He sacrificed his friends to follow Jesus and relies on prayer to find work and to live. He spends so much of his time in prayer and in scripture. He was able to give such in depth scriptural explanations for topics like speaking in tongues and tithing. We were fascinated with his every word. He found it to be such a foreign concept that people in America could step into a church without ever sacrificing anything. We found such common ground in our conversations as he spoke of his introverted personality and him having a hard time making friends and trusting people. We found he struggled with relationships, singleness, and doubt…which all sounded too familiar to us.

These two relationships were just a small glimpse at how we discovered we are all the same yet so different at the same time. 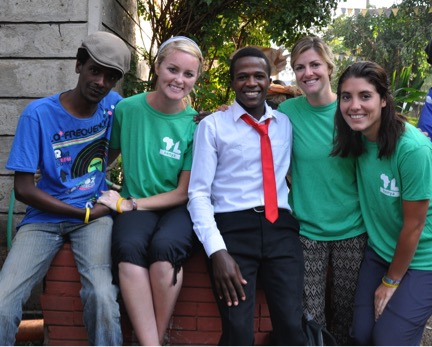 Finding Joy in the Small Things

For entertainment at camp, in Nakuru, at the orphanage, or just every night with our team, we found such joy in a whole lot of dancing and games that required no materials. We played music as often as we could. One of the most moving moments was when Kelly turned on “Carry your Candle” and the children at the orphanage began singing it. It was as if the heavens opened up and the choirs were singing! We had a dance party at every stop we made and sometimes just in the van on our way to the next stop. We played games such as, “This is so much fun”, which simply requires 2 people and a lot of laughter. At camp we jumped our hearts out as we shouted, “Do you have rubber shoes?” or as we played, “Balance the ball”…with no ball. It’s amazing how much fun you can have with no props, no iPads, no toys…just our imaginations.

“Yet what we suffer now is nothing compared to the glory he will reveal to us later. For all creation is waiting eagerly for that future day when God will reveal who his children really are. Against its will, all creation was subjected to God’s curse. But with eager hope, the creation looks forward to the day when it will join God’s children in glorious freedom from death and decay.” – Romans 8:18

This verse is so much more real to us after having experienced the country of Kenya and God’s wonderful creation through the Kenyan people and the African animals. The presence of God is noticeably strong in Kenya as you gaze upon the landscape and interact with the people. The Christians there have faith in God’s promises so unwavering. God definitely has not forgotten Africa! This sums it all up for us…as we come home, humbled that the Lord allowed us to go and experience what He is already doing in Kenya. He did not need us to go. We got to go and be a part of what is already in place. We thought we would go and change the world, and oh how humbled we were.

Go be part of what God is already doing anywhere in this world, because He is everywhere.

“Do Something” by Matthew West

I woke up this morning

Thought, how’d we ever get so far down

How’s it ever gonna turn around

So I turned my eyes to Heaven

I thought, “God, why don’t You do something?”

Well, I just couldn’t bear the thought of

The thought disgusted me

So, I shook my fist at Heaven

Said, “God, why don’t You do something?”

Big thank you to Maggie Aiken, Caroline Reynolds, and Kelly Martin for sharing their experience in Africa with us! Y’all are awesome and I know this will inspire and encourage others to go join in where God is already at work in their life!